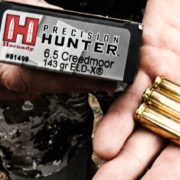 You can really start a lot of interesting debates on social media, around the campfire, outdoor forums, wherever it may be about the 6.5 Creedmoor. There’s a very love it or hate it type feeling about this cartridge. But to me, when you pair the 6.5 Creedmoor with the right ammo and the right situation, it’s a deadly combination.

Just like most of the calibers out there, if you use the right bullets in the right conditions, you’re going to find success with it. So those people that don’t like 6.5 Creedmoor a lot of times (I think probably more often than not) they’re using the wrong bullet when it comes to bullet selection. 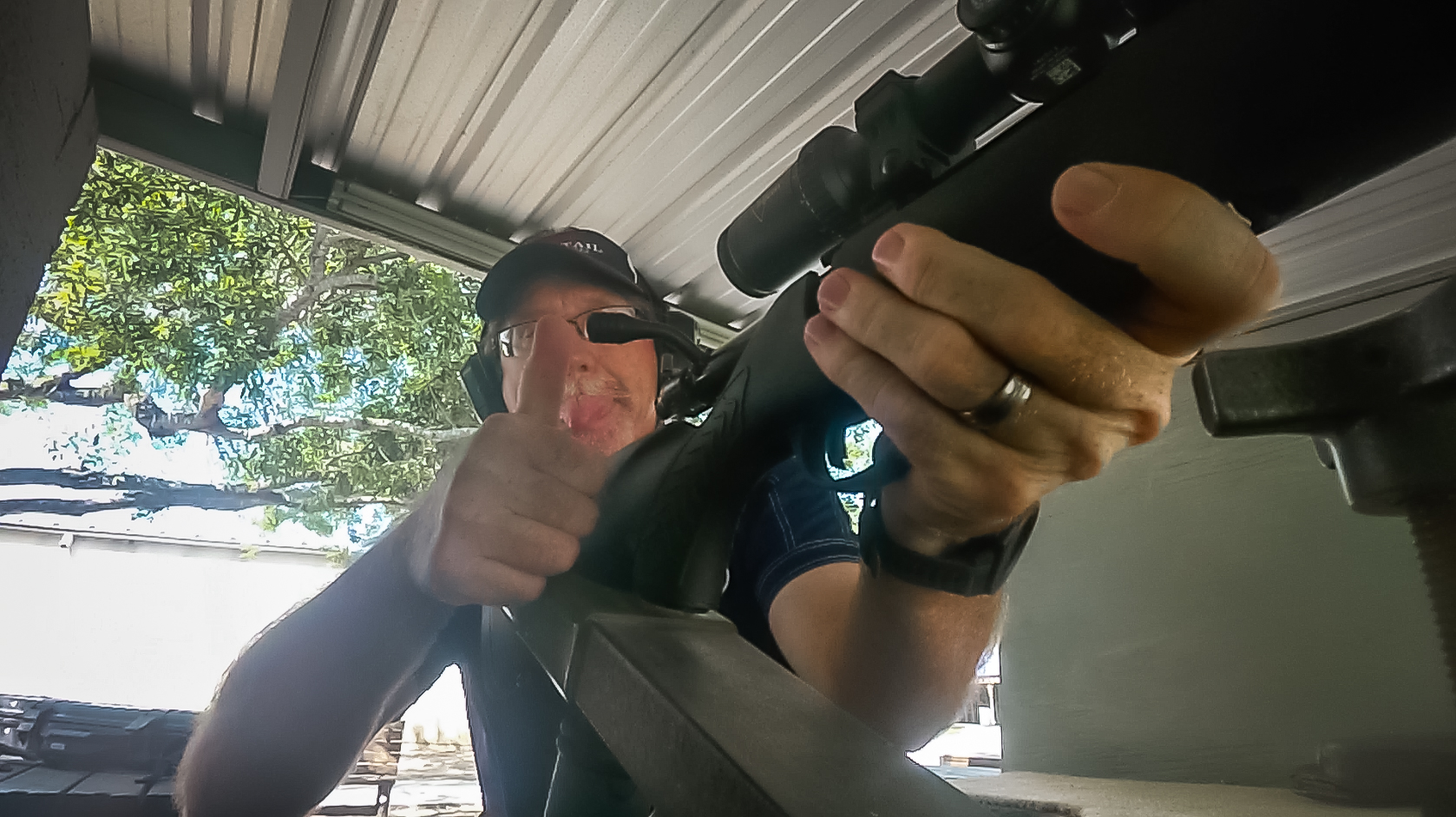 I recommend to a lot of people, that if you’ve got a rifle and want to know what ammo performs the best with your rifle, grab four or five different boxes of ammo (with four or five different bullet weights) from different companies, and go shoot it. At the end of the day, I think what you’ll find is which bullet your rifle performs best with. When you do that and spend the time on the range, it’s going to make you a better shooter and hunter, because you understand and now know what your gun is going to do. I think that pays off a lot.

When you look at the 6.5 Creedmoor, there are a tremendous amount of bullets available that are designed for long-range target shooting out there. There are probably fewer bullets designed for that cartridge when it comes to hunting. But there are some really good bullets out there that I advocate using that we’ve found and used in the field with tremendous success.

Just like any cartridge, any round, anything out there, there are limitations. The 6.5 Creedmoor (shooting the right ammo), I think it’s perfect for a lot of your light, thin-skinned big game animals like African antelope, whitetail deer, etc. It’s going to be right at the lower end of cartridges I would probably pick for elk but I mean, we’ve seen it in action on elk hunts before in which it performed flawlessly and knocked them down. But once again, I think it’s just kind of right there at that threshold.

Which Brand of 6.5 Creedmoor We Chose 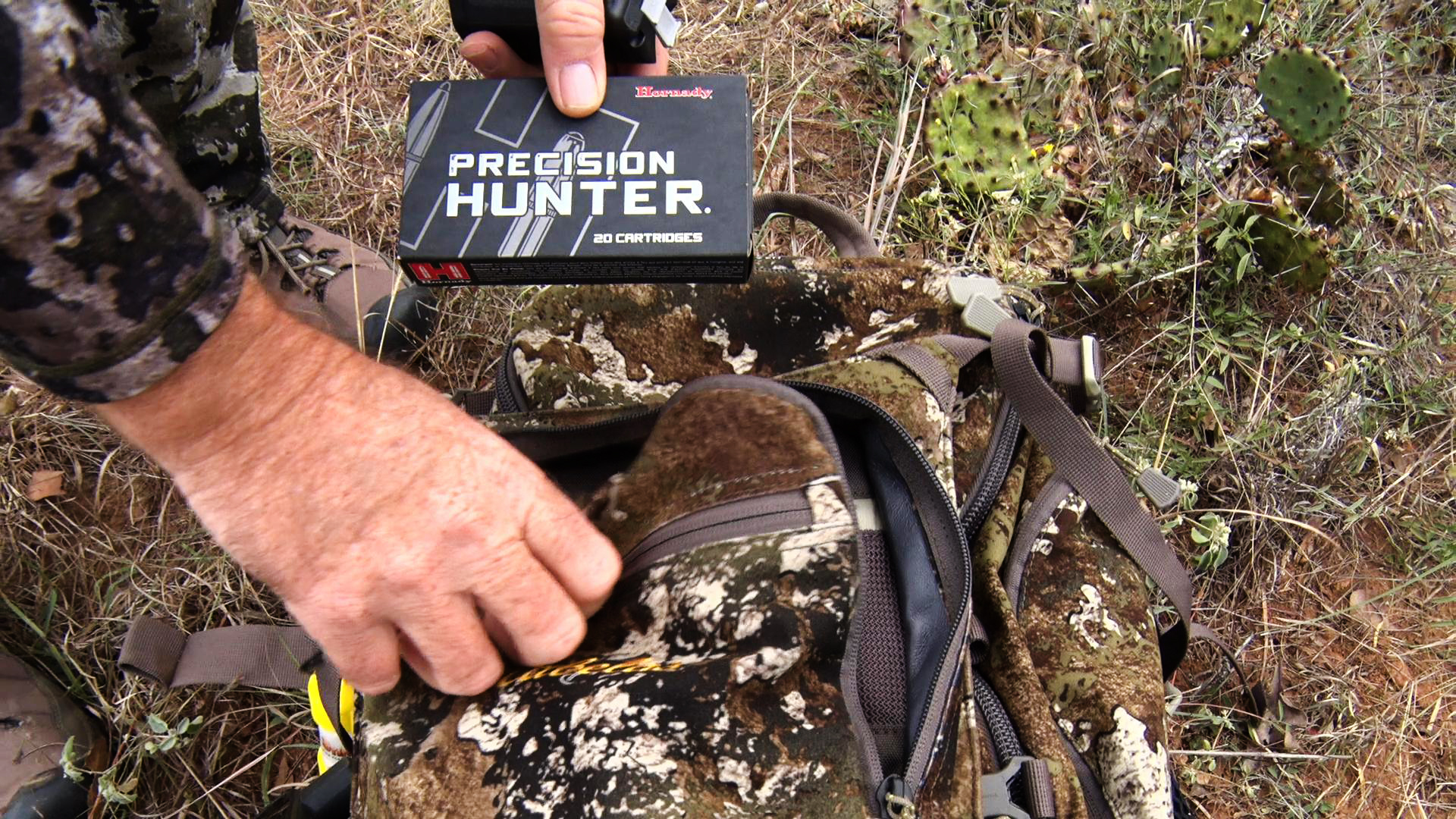 So when it came time for me to kind of settle on a bullet that I liked we shot a lot of different ones, I read a lot, looked at a lot of different things, and that Hornady 143 grain ELD-X round really seemed to be the one that we got the best results out of it. I mean, we began to get immediate knockdowns, animals dropping right there. It performed in the African forest very well and a lot of our hunts that we were doing over there. I mean, it was one shot, one kill type round. However, when you talk to a lot of professional hunters, they’re going to talk about the 6.5 Creedmoor is maybe not good enough for wildebeest and animals like that. But I have seen it knock down a wildebeest (it took a couple shots) and do its job and wildebeest are notorious for taking multiple rounds in those types of hunting situations. So you just got to study, learn, and make those decisions for yourself personally, for where you’re hunting, and the situation that you’re dealing with. Ultimately you got to put that bullet where it matters, to find the ultimate success.

I think in the end, the 6.5 Creedmoor is an excellent whitetail deer hunting round. I think if you’re making good shots and you’re using the right kind of bullets, you’re really going to be pleased with it. I also think it’s a phenomenal long-range target shooting rifle. I think it’s far better than a .308 Winchester based on the data and based on the things that I’ve seen out there. So when I look at the 6.5 Creedmoor, the haters are gonna hate. But I promise you when you’ve seen it in action on quite a few of our hunts out there it is flat out hammering them (the deer) when we put the bullet where we’re supposed to. 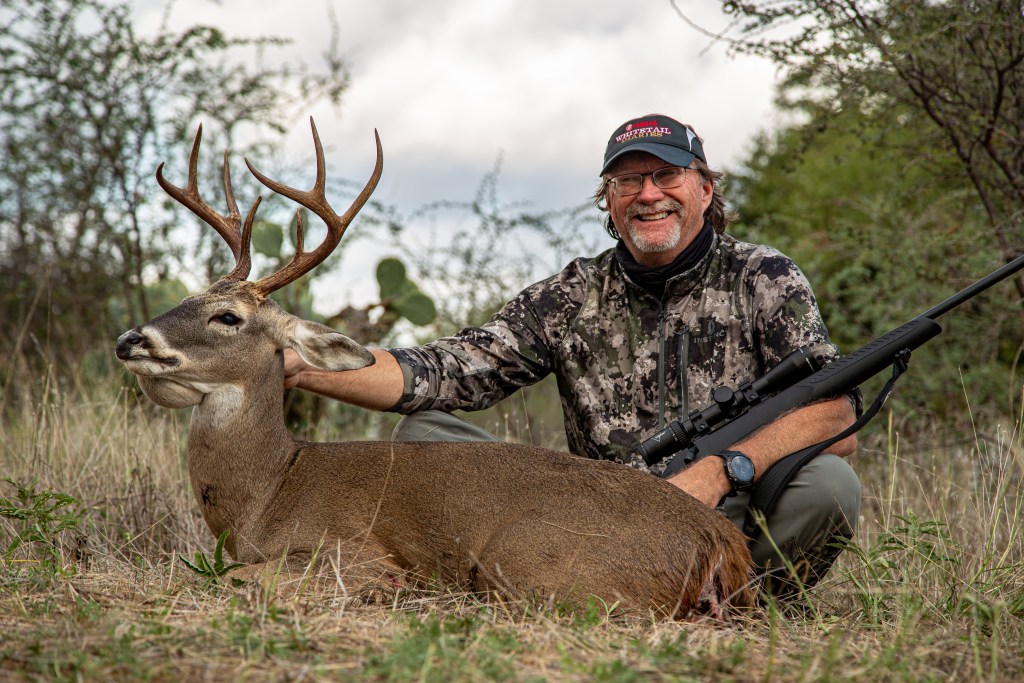 Wade posing with a unique Texas Whitetail and his Thompson/Center Compass II chambered in 6.5 Creedmoor 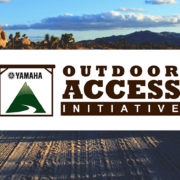 “Enjoying the outdoors has become a primary source of entertainment and recreation for many this year, with some public lands seeing record traffic from enthusiasts,” said Steve Nessl, Yamaha’s Motorsports marketing manager. “The Yamaha Outdoor Access Initiative is the leading resource for land managers to help ensure trails and facilities are appropriately preserved and new opportunities are created to meet these rising demands.” 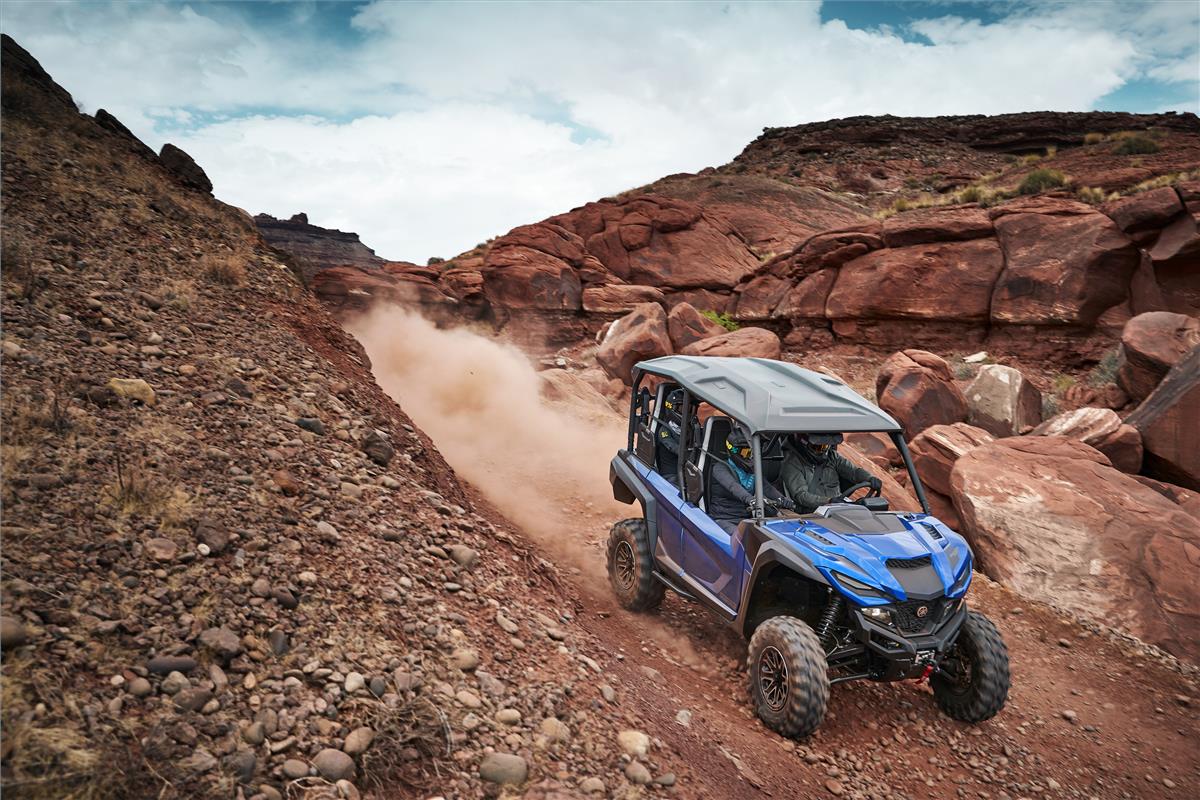 The third quarter 2020 Yamaha OAI grants, totaling more than $83,000, were awarded to the following organizations:

“These dealer-approved projects will provide a range of support for Yamaha customers and riding enthusiasts from staging area shading and educational structures at Joshua Tree National Park, to snowmobile and OHV bridges on a trail system near Duluth, Minnesota,” Nessl said. “Some of these projects are part of larger improvement programs, and others are standalone efforts that wouldn’t happen without the support provided by the Yamaha OAI grant program. It’s important and necessary work, and we proudly align with our dealer network to make a real, positive impact on our customers’ outdoor experiences and opportunities.”

For more than 10 years now, Yamaha has been issuing quarterly grants to non-profit organizations supporting the program’s mission. Yamaha has funded more than $250,000 in grants this year, and over the life of the program, Yamaha has contributed more than $4.5 million in aid to more than 380 projects across the nation. Yamaha’s OAI-supported efforts work to improve access to public land for outdoor activities including riding, hiking, biking, camping, hunting, fishing, and motorized recreation.

The deadline for submission to the 4th quarter 2020 funding cycle for the Yamaha Outdoor Access Initiative is December 15, 2020 – applications must be postmarked by that date. Submission guidelines and applications forms are available at YamahaOAI.com. Connect with Yamaha on social media via @YamahaOutdoors or search any of the following hashtags on all platforms:  #Yamaha #YamahaOAI #REALizeYourAdventure #ProvenOffRoad #AssembledInUSA

For more than a decade, the Yamaha Outdoor Access Initiative has led the Powersports industry in guaranteeing responsible access to our nation’s land for outdoor enthusiasts. Through this program, Yamaha has directly and indirectly supported thousands of miles of motorized recreation trails, maintained and rehabilitated riding and hunting areas, improved staging areas, supplied agricultural organizations with essential OHV safety education, built bridges over fish-bearing streams and partnered with local outdoor enthusiast communities across the country to improve access to public lands. Each quarter, Yamaha accepts applications from nonprofit or tax-exempt organizations including OHV riding clubs and associations, national, state and local public land use agencies, outdoor enthusiast associations and land conservation groups with an interest in protecting, improving, expanding and/or maintaining access for safe, responsible and sustainable public use. A committee then reviews each application and awards grants to deserving projects. Examples of appropriate projects for grants include, but are not limited to: 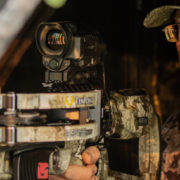 Industry leaders TenPoint Crossbow Technologies and Garmin have teamed up to release the most powerful, most accurate long-range crossbow ever – the Vapor RS470 XERO. Delivering supercharged speeds up to 470 FPS and the revolutionary ACUslide cocking and de-cocking system, the Vapor RS470 XERO is equipped with the new Garmin Xero X1i Rangefinding Scope to provide exact aiming at any distance for unmatched long range accuracy.

“The Vapor is the most accurate crossbow I have ever shot,” said Rick Bednar, TenPoint CEO. “In teaming with Garmin, it takes our commitment to building the most accurate high-end crossbows to a new level of technological achievement.

The NEW Garmin Xero® X1i crossbow scope with built-in laser range finder is the first of its kind. This auto-ranging digital scope with 3.5X magnification automatically measures distance to a target. A single button press lets you range game up to 250 yards away and reflective targets up to 500 yards away. 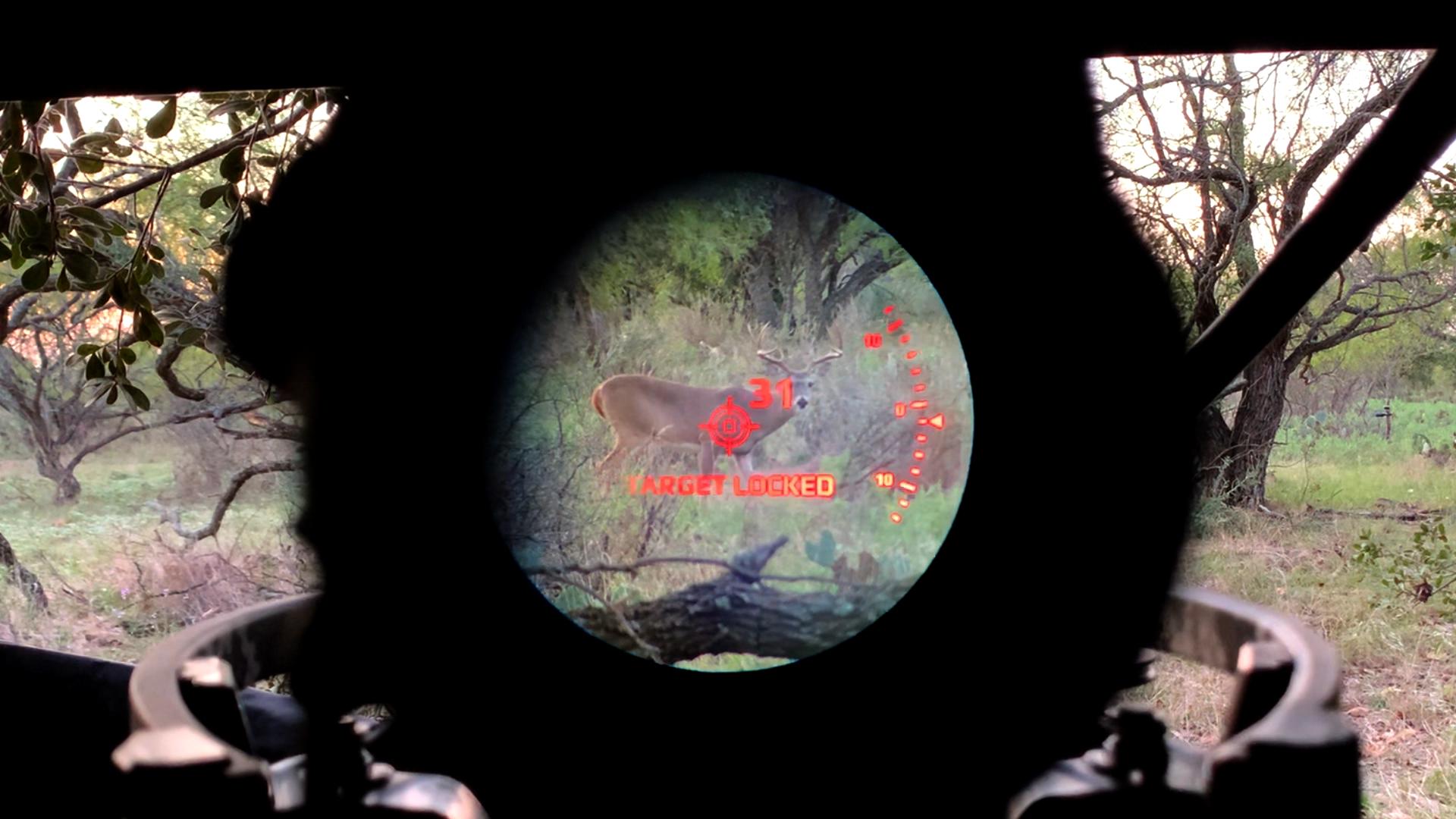 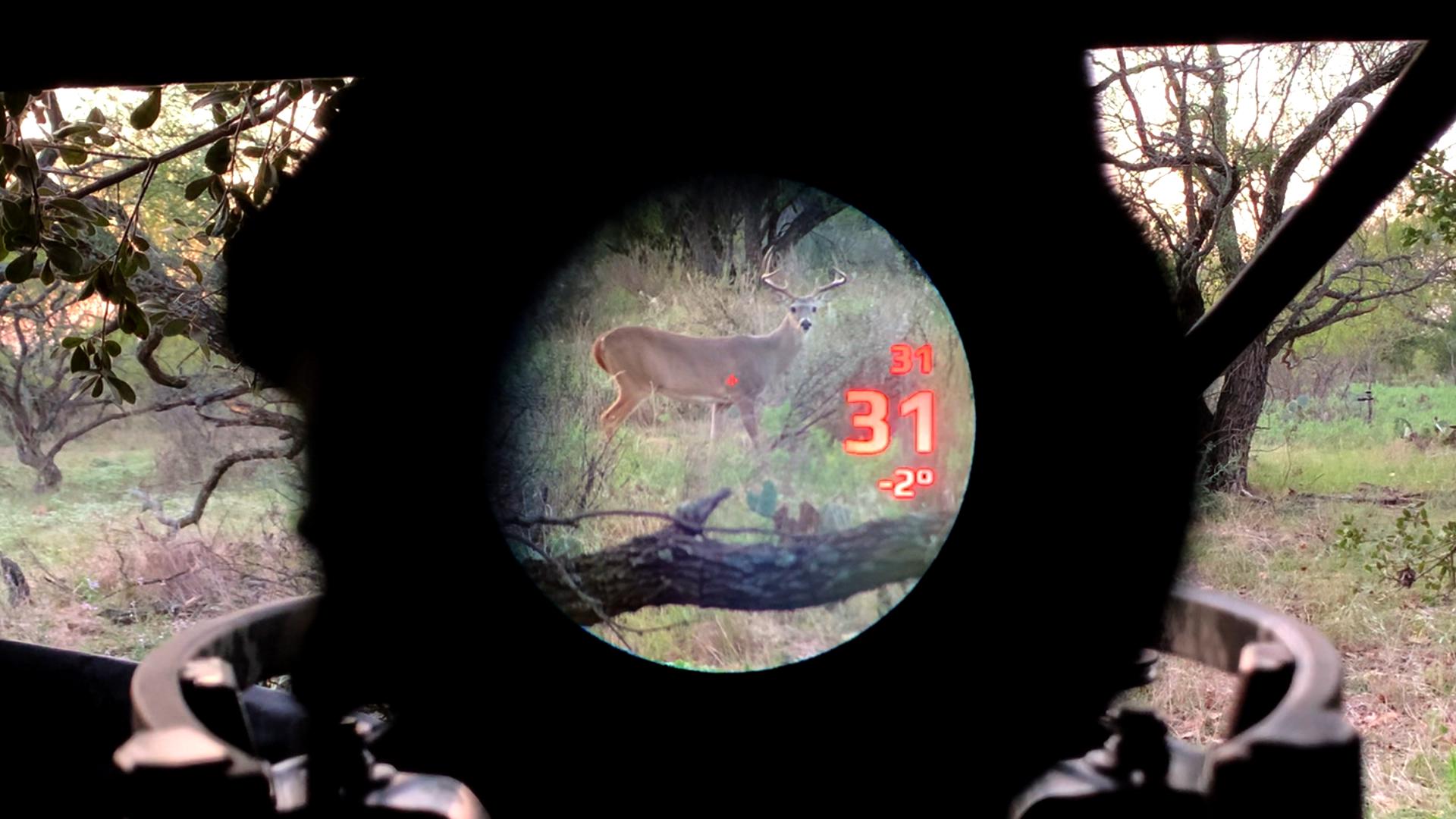 Precise illuminated aim points automatically adjust for both distance and brightness conditions to allow you to see your target, unobstructed by reticle patterns. The days of “gap shooting” with multiple aim points are gone, you need merely to range the target by way of the built-in touchpad on the grip and use the single aiming solution provided by the Xero X1i.

The Laser Locate™ waypoint projection feature works with compatible Garmin devices (sold separately) to show you exactly where the target was located when the shot or range was taken, so you can better track game or find bolts. In addition, the scope allows you to create custom bolt profiles with unique aim points for each setup, while its Target Lock and Steady Shot features assist with ranging and aiming performance to help improve accuracy.

The ACUslide, the talk of the 2020 crossbow market, features the company’s groundbreaking Auto-Brake Gear System, which allows for silent cocking and safe and controlled de-cocking of the crossbow.  The Auto-Brake Gear System eliminates the potential of losing control which can lead to injury or costly bow damage during the de-cocking process. While de-cocking with the ACUslide, the user can remove their hand from the handle at any point, with no other action required – and the handle will stop in place. 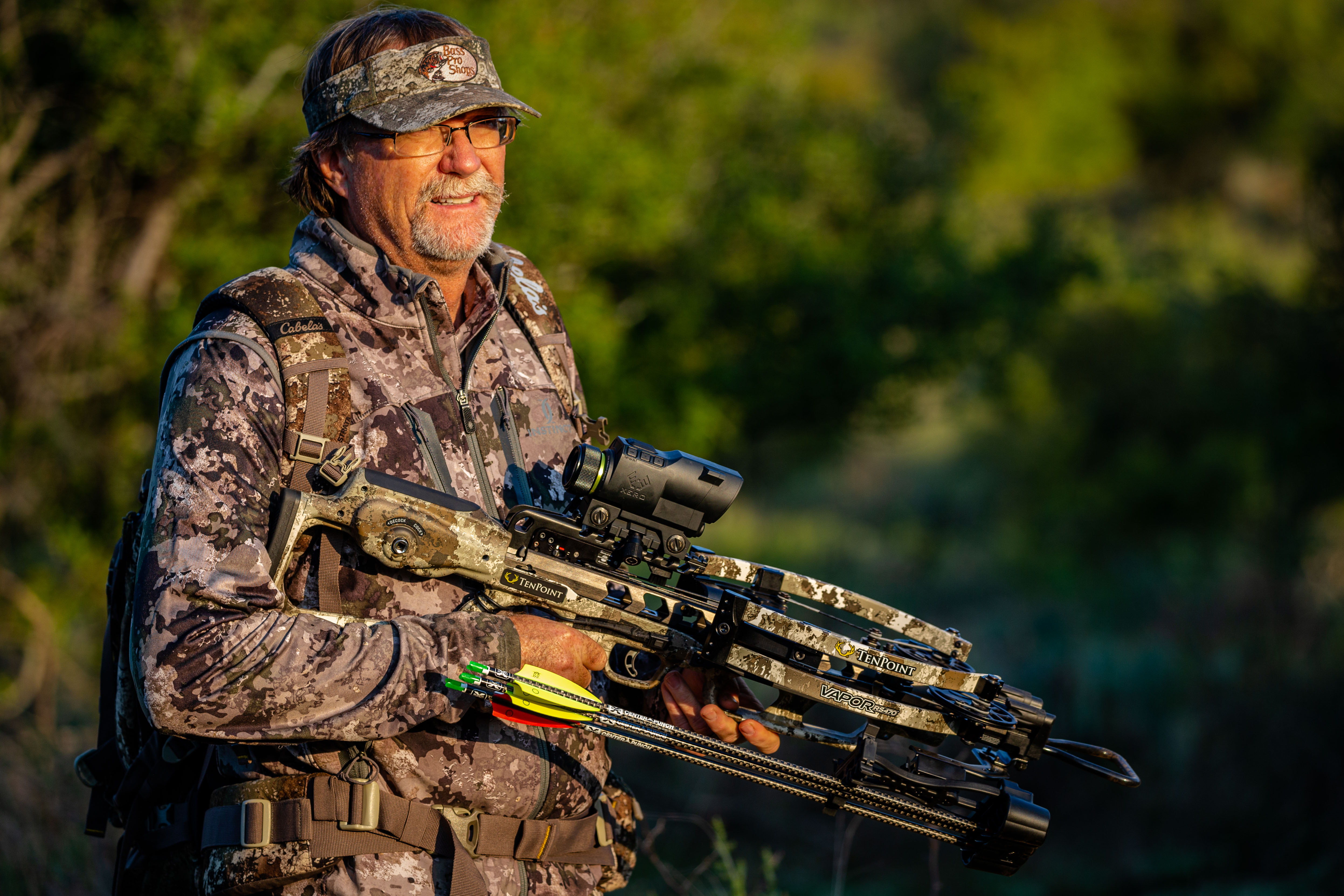 The Vapor features a patented reverse draw bow assembly that draws the string through the riser, creating an industry leading 17-inch power stroke.  The increased power stroke generates more speed with less draw weight – creating a smoother, quieter shot. The elongated power stroke also keeps the arrow nock engaged with the string for an additional 4-inches compared to traditional crossbows, before release – this is a critical component in performance, as the longer the nock remains engaged with the string, the more accurate the arrow will be upon impact.  In addition, this center-mounted riser provides superior balance, eliminating the “nose heavy” feel of traditional crossbows and making it easier to hold steady and increase accuracy.

The RX7-Cam™ system rotates an industry leading 404-degrees to produce speeds up to an unprecedented 470 feet-per-second. The crossbow’s revolutionary Vector-Quad™ cable technology utilizes four cables instead of the traditional two which eliminates cam lean and generates straight-nock travel leading to same-hole downrange accuracy.

The Vapor RS470 XERO features the company’s S1 trigger.  This 2-stage, zero-creep design features an advanced roller-sear system that delivers a consistent crisp, 3.5-pound pull. The trigger is equipped with a DFI™ (Dry-Fire-Inhibitor) and is fitted with a nylon-filament arrow retention brush that improves arrow grip and alignment to reduce noise and vibration. An integrated string stop system is also included to further reduce noise and vibration.

The crossbow has a 20-inch -MICRO-TRAC™ fluted aluminum barrel that reduces the flight deck surface by an incredible 50%.  The minimal string-to-barrel contact increases accuracy and provides string life in excess of 1,000 shots.

The barrel is fastened to the ultra-light, two-piece TECH-X™ stock that features multiple weight reducing cutouts, as well as a hollow pocket that houses the ACUslide cocking and de-cocking system. The stock also features an elevated cheek piece which provides the shooter with perfect eye level alignment for the XERO X1i Rangefinding Scope.

The Garmin Xero X1i rangefinding scope has magnification of 3.5X, ranges out to 500 Yards with angle compensation, and offers the ability to set the scope up for multiple custom arrow configurations.  The scope features Laser Locate, which allows the shooter to mark where the shot was taken for more accurate tracking after the shot.  Steady Aim and Aim Point level features let you know motion or canting may impact your shots point of impact.

Fully assembled, the crossbow weighs just 8-pounds (w/o accessories), measures only 31-inches (w/o stirrup) in length and shoots up to a supercharged 470 feet-per-second.